As always, we enclose the factsheets (December 2019) of both funds and a pdf file showing the best and worst equity performers of the fund in the month. We also show at the bottom a performance attribution analysis for Cartesio X and Cartesio Y.

Days of wine and roses…

2019 has been a stellar year for most asset classes. European equities delivered a 26% total return, the third highest return of the century with one of the lowest volatilities (11%). With treasury bills in negative territory, this combination results in the best risk adjusted returns for European equities since inception of the funds in 2004. Long term eurozone bonds delivered 6.7% even after a setback of more than 3% since the lowest bond yields in history were seen in early September. High yield returned 11% and subordinated financial debt 18%. US equities returned more than 30% and underperforming assets like EM equities or commodities delivered 19% and 9% respectively.

It is clear to us that the volte-face of central banks explains most of this stellar performance although we are not sure it is enough justification. It is true that economic growth expectations are less dire than at the end of 2018, but we would not characterize the current outlook as robust. Let us just say that we have probably borrowed returns and peace of mind from 2020 at the very least. Equities re-rated, particularly in Europe where there was no EPS growth. We are not alarmed by the valuation of European equities, but we are not enthused either. They remain vulnerable to lower growth expectations. US equities are trading at nose bleed valuations in terms of Shiller P/E or market cap to GDP.

2019 was a good year but it was not an easy year. After double digit losses in global equities during 4Q 2018, the consensus was an imminent recession and total faith in the predictive powers of the yield curve. Our best decision during 2019 was to fade/ignore that pessimism and increase equity exposure in both funds, during 4Q 2018 and during 2019. In PCE, during 2019, we have increased equity exposure to 63% from 44% and in PCI to 21% to 12%.

After a difficult first six months for our equity portfolio, the rotation towards value helped our portfolio to deliver a 21% return for the year. Sticking to our portfolio and buying equities during corrections has been our best decision. In credit, our portfolio returned 15% (11.9% net of duration hedge). We have reduced our credit exposure to 13% from 18% a year ago. We keep a short position in bonos (5.2% of the fund) and bunds (2.6%) and we think that September marked the bottom for long term interest rates. Inflation may be low but it is not dead and a greater focus on fiscal policy may, at the very least, change the supply/demand dynamics in the asset class in the medium term.

The whole debate about valuation of equities and credit, absent a recession, appears to hinge on the fact that, against microscopic interest rates, valuations are not stretched. In the Days of Wine and Roses (film by Blake Edwards, also director of the unforgettable The Party with Peter Sellers), the dark side of alcohol addiction becomes clear after the initial days of promise in a relationship where drink made the couple feel good. Low rates are making us all feel good, but we are becoming addicted and they may not be the cure for all that could be wrong with the world economy. We still don´t know how this movie ends, but it will be interesting, and a happy ending is not guaranteed. We are in uncharted waters where the possibility of a liquidity trap and a debt recession remains, hence the debate about the role for fiscal policy and central banks’ willingness to keep monetary policy easy.

Our intention is to maintain current risk levels and concentrate on managing the equity portfolio. We do maintain a value/cyclical bias which we believe will be rewarded in coming months. Our default setting continues to be to increase equity exposure on weakness. If the market keeps shooting higher, we will probably buy some protection for the first time since the middle of 2018. 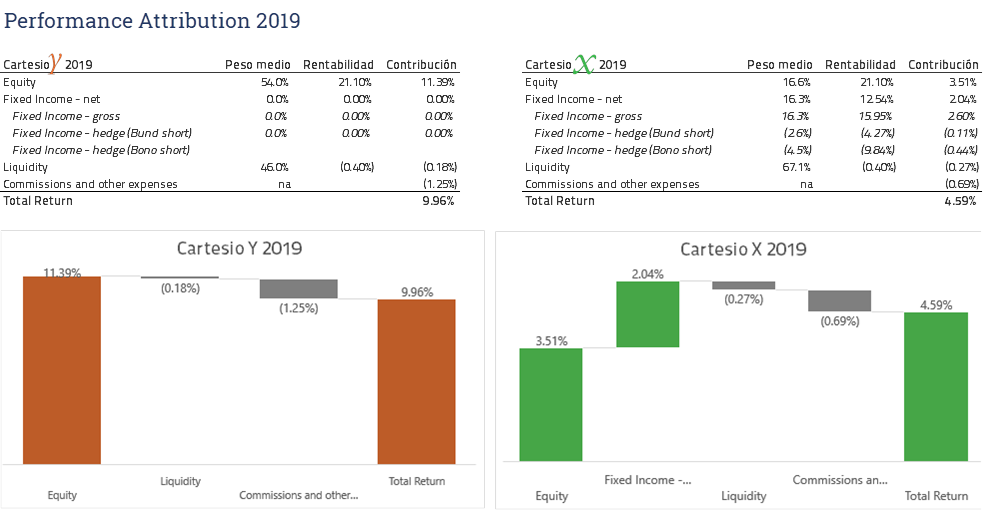